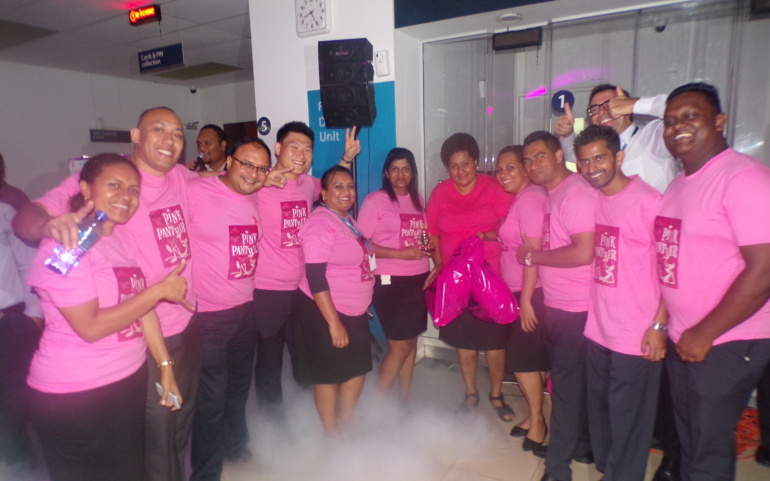 The Fiji Institute of Bankers (FIB) raised more than $800 in a fund-raising activity held last night at ANZ House in aid of Pinktober Cancer Awareness month.

The fundraising, dubbed “Pinktober Quiz Night” with a Halloween theme, was well attended by members of the Institution.

Each Affiliation bank of FIB sent a team each where they were tested their general knowledge on current affairs and cancer related issues throughout the five rounds of the quiz event.

FIB Executive Secretary Eta Bilitaki says she is very happy with the turn out and to see members participating in activities organized especially for them.

“I was very happy to see members taking part and enjoying themselves. Last night we managed to raise more than $800 and this money will be donated to the Fiji Cancer Society,” she said.

“The Institute organized this function to round up Pinktober and also raise the awareness of members about the breast cancer campaign that was dedicated for the month of October, and plus we want to raise funds to give back to the community.”

At the end of last round, the Winning Team was “Pink Bonds” of Reserve Bank of Fiji which took the prize of a Trophy and a Dinner voucher sponsored by FIB President Mr Saud Minam.

The First Runner- up prize was awarded to

A special prize was awarded to Team “Pinky and the Brains” of HFC Bank for best costume which depicted the ‘Halloween theme’.  And their prize of Movie vouchers.