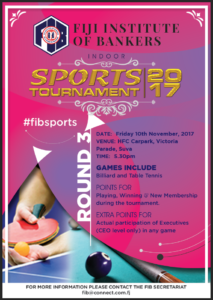 With one more round to go before the semifinals, teams from the respective Affiliation of banks are competing for a spot in the semifinals of the FIB 2017 Indoor Games.

During the second round of the tournament that was held on Tuesday night October 24, at ANZ House, all teams brought their A-game and competed shoulder-to-shoulder with the best in carom board, card game (troop ten) and darts.

So far Team ANZ is leading with 21 points and followed by Team FDB with 20 points. Team HFC in third place with 17 points, just three points behind FDB, while Team RBF come in fourth with 16 points. Team BOB in 5th place with 14 points, Team BSP in 6th place with 13 points, WBC in 7th with 10 points while Team BRED is yet to score a point.

Apart from competing in the indoor games, extra points were awarded to the team if their staff registered as FIB new members (bonus point).

Round Three will now be held on Friday 10th November 2017. The venue is at HFC Carpark, Victoria Parade, Suva beginning at 5.30pm. Refreshments will be provided.

Games to be played in Round Three are Billiard, Table Tennis, Darts, Carom Board and Troop 10.

Round Three will determine the two best teams from Pool A and Pool B to face their opponents in the semi-finals.

The winning team will proceed on to the finals and the other teams will also be competing for their rankings in this tournament.

The tournament is organized to engage members and take time off from work to have fun and get new members to sign up.